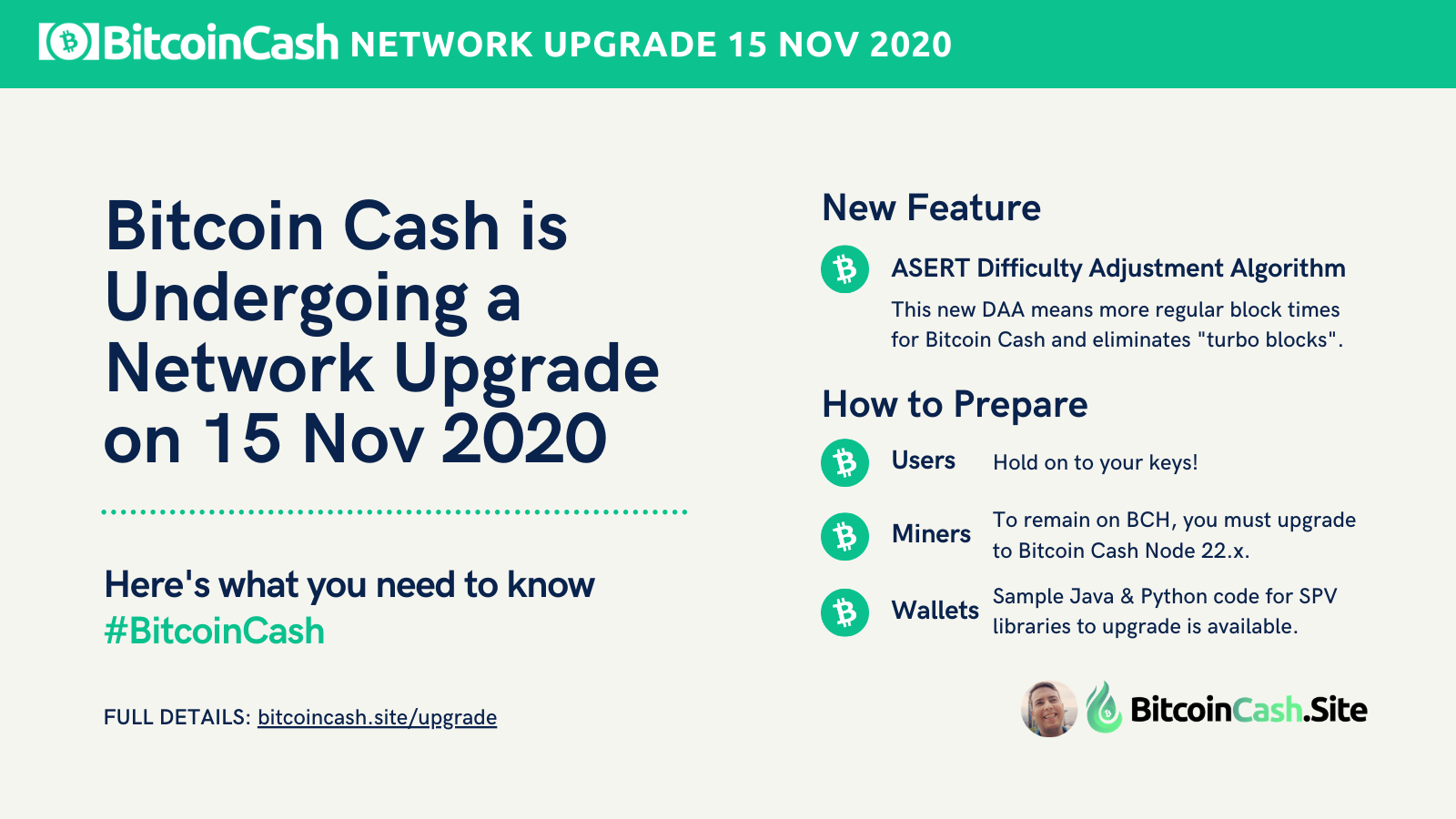 Here is what you need to prepare.

The Bitcoin Cash Network is undergoing a network upgrade on 15 November 2020. Due to one of the seven Bitcoin Cash BCH full node software projects attempting to divert 8% of the coinbase reward into a wallet under the control of one Amaury Séchet, Lead Developer of Bitcoin ABC and owner of BitcoinCash.org, the situation is complex. It is recommended that miners, exchanges and others keep tabs on the situation.

Here's what you need to prepare.

Currently, due to switch mining, Bitcoin Cash blocks are not always found steadily every 10 minutes. Instead, we sometimes see “turbo blocks”, i.e., several blocks found within less than 10 minutes, one or more of which are often empty. “Turbo blocks” create irregularity for the end user at the moment of being able to predict when a transaction will receive its first network confirmation, and as such are not desirable.

Learn more about the ASERT DAA, which is being added to Bitcoin Cash thanks to the work of developers Mark Lundeberg and Jonathan Toomim, as well as the collaborative approach of other developers and Bitcoin Cash full node software projects.

Users are advised to hold onto their keys at all times. Not your keys, not your coins.

Be sure to upgrade your wallet(s) to the latest versions. If in doubt, please ask your wallet provide if they have upgraded for the new Bitcoin Cash DAA.

Given the possibility of a minority fork of the Bitcoin ABC full node software, users are advised to stand by for instructions on how to fork any ABC coins that may come into existence. Don't count on exchanges to fork your coins as widespread exchange support for the potential ABC coin is not guaranteed.

The ASERT DAA is a hard fork consensus change. It is REQUIRED that you update your full node software in order to remain on the Bitcoin Cash chain on 15 November 2020.

Other compatible implementations include:

SPV libraries will need to upgrade to remain compatible with the new ASERT DAA. See example implementations for Java and Python.

All wallet maintainers are encouraged to verify the compatibility of their software with the new ASERT DAA.

Technical support is available for Bitcoin Cash users, developers and businesses. Here are some support options:

At this time, only a minority fork, or split, seems indicated by the levels of support for Bitcoin ABC available to the public.

Therefore, if there is a fork, it currently appears that it will largely be inconsequential and will not affect your use of the Bitcoin Cash network in any significant manner.

The potential network split was instigated by the Bitcoin ABC full node team's lead developer Amaury Séchet on 6 Aug 2020 when he announced that the Bitcoin ABC software would include a coinbase rule taking 8% of the coinbase reward from every Bitcoin Cash block and diverting it to an address under his control.

Almost all of the Bitcoin Cash ecosystem has declared their firm opposition to Séchet's plans. This includes a very large percentage of the people building on Bitcoin Cash and around 82% or more of hashrate.

Miners (via coinbase signaling), holders (via votes.cash) and the marketplace (via primarily CoinEx futures) have expressed almost no support at all for the Bitcoin ABC proposal.

All stakeholders are expressing overwhelming support for Bitcoin Cash to continue the same protocol miners and exchanges have always known, and to remain a decentralized ecosystem, rather than a cartel as Séchet proposes.

Get a fuller background by reading the following articles.

To get updates on the split situation, you can use one of the following options:

Here is a short presentation on the state of Bitcoin Cash in Q4 2020.

Help spread the news so the ecosystem is prepared. Feel free to download and share this image. Click on it and save, or left-click and save the image. Need different dimenions? Email hello@bitcoincash.site.